Activity rings are a visualization made famous by the Apple Watch, which encourages you to “close your rings” every day by completing various activities.

Before we get started though, I should mention that these rings only work in certain situations when displaying certain data sets. While they are great for showing a percentage and looking good while doing it, they are a bad idea if you want your users to compare the rings to each other. The outer rings will be longer than the inner rings even when they are representing the same amount. When used judiciously though, these rings are great for showing data in an engaging, interesting, and aesthetically pleasing way.

If you’d like to jump straight into the finished code, check it out on codepen here.

Also, I’ve put a ton of reference material in the References and Further Reading section below. If you’re unfamiliar with SVG, CSS, or any of the technologies used in this tutorial, check them out to get up to speed.

The key to making these easy to use is making the circumference of the circle equal to 100. If we do that, then we’ll be able to show percentages
without having to do any scaling when we render.

The circumference of a circle C equals two, multiplied by pi, multiplied the radius of the circle.

Which means that our magic number for the radius of a circle with a circumference equal to 100 is r = 15.915

Ok, let’s put it all together and draw a circle.

The cx="50%" cy="50%" renders the ring in the middle of our ViewBox, and by adding class names, we can style them like we would HTML components, though SVG elements have a few new attributes to work with such as fill and stroke. 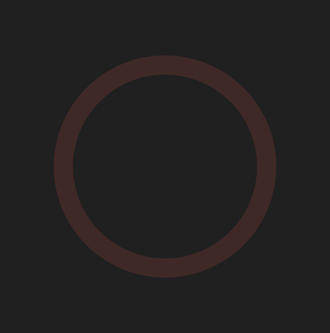 That’s not bad, but not very interesting either. Let’s add a ring representing 85% completion for this activity. First, we’ll add another circle after our background circle. SVG renders in source order, so the items first in the markup are rendered behind the items later in the source.

The stroke-dasharray style attribute will allow us to control how much of the circle to draw. This property allows developers to have a large amount of control over how dashed lines are rendered in SVG. We’ll be using it to draw the “filled” part of our circle.

The first number tells the browser how much to draw. In our case, since the circumference of the entire circle is 100, we can set this equal to the percentage and it will draw a line for the right amount! The second number is how long to make the gap in-between the dashes. We can just set this to 100 so that no matter what percentage we’re displaying, we’ll just get one line.

For the complete code, check it out on codepen